There are instances when Outlook users experience issues while trying to access some email attachments in MS Outlook 2019 / 2016 / 2013 / 2010. This issue may come in the form of an error message (Unable to open Outlook attachments) which will prevent you from opening the attached files.

When you are unable to open Outlook attachments, there may be a number of reasons behind it. Below we have listed the most common ones for you.

One more case related to temp file folder is that after a certain time-period Outlook stops saving temporary files with the same name.

In this section, we will discuss separate solutions for each cause. Perform the steps sequentially for each given solution one by one.

II. To Unblock Blocked attachments due to Outlook Security Protocol:

Before performing the following steps, make sure that MS Outlook is closed. 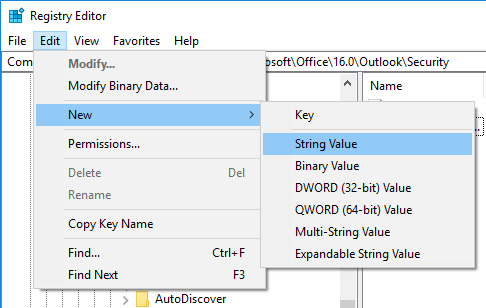 Note: This process is only applicable to those attachments which are blocked by Outlook. You can refer here to check all the blocked attachment extensions. Also, it is advised to change back the registry once you saved the attachment, since it may result in a virus infecting your system in the near future.

III. Solution if the cause is PST Corruption

Even after implementing the above methods, you still are unable to open Outlook attachments, then the most probable cause is corrupt PST file. The two ways to deal with it are explained as follows:

What to do when nothing works? Stop using Outlook altogether? Well no, you don’t need to take such drastic measures. Because we have a safe and result-oriented approach in the form of SysTools Outlook Recovery right here for you. It is by any means the BEST Software to repair Outlook PST corruption without ScanPST and also it will repair any level of corruption from PST file without fail regardless of Outlook version. Be it any issue such as ‘unable to open Outlook attachments’, as long as it is related to data file corruption, this tool can solve them all. The software can scan Outlook 2019, 2016, 2013, 2010, 2007, 2003, 2002, 2000 data file.

It is an inbuilt tool provided by Microsoft to rectify minor corruption issues in Outlook 2019, 2016, 2013, 2010. To use it, simply Run scanpst.exe in the Run dialog box, browse the concerned Outlook PST file and start the process. It will repair the data file of any header errors and other minor issues. Being a free utility, it certainly is worth trying.

However, this tool is utterly useless in cases of major corruption. It is also noticed that it is incompetent when there is an issue with contacts, calendars, tasks, and attachments. In addition, data loss issues have often been associated with this inbox repair tool.

If you are unable to open Outlook attachments, there could be various reasons behind it. In this article, we discussed all those reasons and gave possible solutions for each of them for Outlook 2019, 2016, 2013, 2010, 2007, 2003, 2000. A variety of manual solutions are provided to rectify this issue. However, in case everything fails, we also included an out of the box automated solution. With this tool, solving any PST file corruption or related problems is now an easy, safe and quick process with no data loss issue whatsoever.